Here you could read articles, ideas, thoughts and my prespectives in art history.

I hope you will enjoy my blog and your comments will be more than welcome!

Maurice was a French artist born on October 17th 1894 at . He was a painter, ceramicist and tapestry maker.
His father was a doctor in , though Maurice wasn't much interested in medicine studies.

His real passion was for the Arts, so immediately after he was graduated, in 1913, he enrolled to the . Unfortunately a year later, 1914, World War I began and he was drafted.
Maurice wounded twice at the war and received the Croix de Guerre (cross of war) which was an award given to those soldiers that were involved in a heroic deed.
After he returned from the war he began working for several magazines and journals as the Sourir, and Le Rire, as an illustrator and caricaturist.

His first exhibition was in 1921 and in 1924 he was a member of the Salon d'Automne, where he started to exhibit regularly. 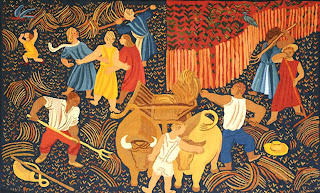 In 1927 he married Simone Gaudioz, whom was known for her strong character. Simone was very supportive to Maurice and he was influenced in his art by her.
In 1933 he began working in ceramics and created a mural in 1936 for the city hall of Montelimar.

In 1941 he begun to create tapestry using natural colors and hand spun wool.
In 1948 he becomes a member of the Legion of Honour, visiting Egypt and exhibiting in Alexandria.

During these years Maurice experienced with different techniques  like etching, decorative art and lithography. Maurice liked to try it all, he was very gifted and challenged him self with many techniques. Yet he was always painting while trying some other techniques.
Maurice won few luxurious prizes as a gratitude to his work, one of them was the prize of the Wildenstein Institute in 1967.
In 1973 he died in Paris.
Armand Lanoux (French writer) says on the work of Maurice:


"Savin's oeuvre is rich. It comprises about 2,500 paintings, 34 finished tapestries, more than 300 pieces of ceramics, 100 gravures and litographs, 9 medals and some leaded glass windows"

By My 35 comments: קישורים לרשומה זו

Delvaux (23 September 1897 - 20 July 1994) was a Belgian painter associated with Surrealism and famous for his paintings of female nudes.
As a young man he took music lessons that took place at the Biology laboratory, he was fascinated by the skeletons exhibited in the display cabinets. He read Jules Verne fictions and the poetry of Homer and his work tremendously influenced by these.
During the years 1916 - 1919 Delvaux studied art at the Academie Royale des Beaux-Arts in Brussels.
His teachers were the artists: Constant Montald and Jean Delville.
In 1925 he exhibited his first solo exhibition.
His paintings of nudes in landscapes during 1925-1930, are strongly influenced by Flemish Expressionists as Constant Permeke and Gustave De Smet.
He was also influenced by the Italian Metaphysical  artist, Giorgio de Chirico and from the Surrealist Belgian artist, Rene Magritte.
His paintings are famous for featuring woman nude with mysterious gaze and gestures, reclining in train station or wandering through classical buildings. He also combined skeletons, men or scientists inspired by Jules Verne stories. In 1959 he executed a mural at the Palais des Congrès in Brussels, one of several large scale decorative commissions Delvaux undertook. He was named director of the Academie Royale des Beaux-Arts in 1965. In 1982 the Paul Delvaux Museum.

By My 33 comments: קישורים לרשומה זו

Here are some paintings of mine that I hope you will like.
I will be more than happy to  get comments.


By My 17 comments: קישורים לרשומה זו

Email ThisBlogThis!Share to TwitterShare to FacebookShare to Pinterest
תוויות: My Art

Don't play with food! and yet some people does:) for our luck.
Here are 3 videos of creative thinking and use of food.

Nowadays the museums exhibits street art, it actually became an art that got its place in the world of art. Museums wants to bring it in and now the questions are: Is it still street art? and How does it affects the street art idea and environment within the walls and regulations of the museum?

Here is a video from an exhibition at the Pori Art Museum- Finland:

And from Ulster Museum Ireland:

By My 7 comments: קישורים לרשומה זו